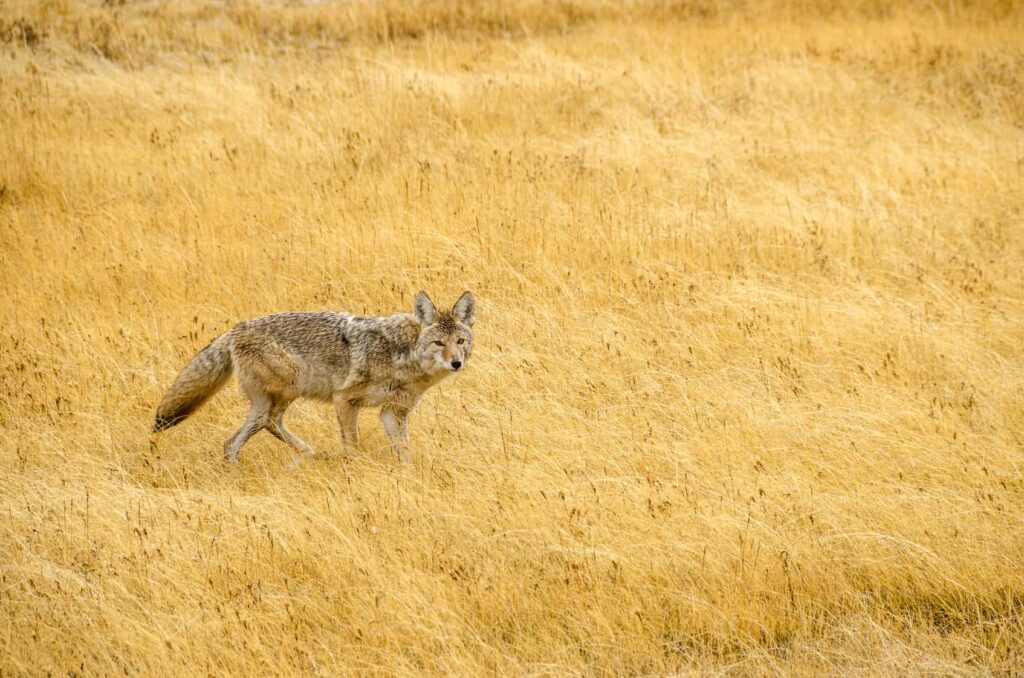 Coyotes are one of the smarter predators out there and baiting them to go up to your spot is an art of its own. Learning how to hunt these animals is something that won’t be done by just watching videos on the topic or reading on it. What you can learn by reading, though, are the common coyote hunting mistakes rookies do. This is why I decided to create this article, not necessarily to teach you how to catch one but what to avoid when planning out your hunt.

One of the most important things you need to remember when out hunting coyotes is that you are up against a smart animal. Never make the mistake of giving up your position by loud sounds or having a spot with bad visibility around you. Make sure that you bring the proper gear and have loads of patience at hand. Perhaps the best advice I can give you, which is most often entirely ignored by rookies is to scout your hunting grounds the day before (if possible). Get to know the curvature of the earth and the hills and fields around you. That way you will find a better spot easier and will thus have the upper hand.

I can point more than just 10 but who doesn’t like an even number, right? Either way, here is the full list before I dive into greater detail about each one of them:

I also want to note that I haven’t ranked those mistakes in any specific order meaning the last one isn’t less important to learn than the first one. Keep everything in mind when out predator hunting as even the slightest errors there can often leave you empty-handed at the end of the hunt. Now, let’s get started with the first one.

Calls are a modern hunter’s dream come true and they have been gaining popularity over the past few years. They are essentially electrical devices that produce sounds which sound appealing to some predators and thus attracting them to you.

There are all sorts of animal noises they can emulate but the best ones are:

Some of the better models also have a prey fur decoy attached to them to attract even more attention.

If you want to learn more about predator calls in general and see which are my top picks for this year, head over to this Buyer’s Guide I wrote on the topic.

This is perhaps the most common mistake I see out of beginner hunters. One prime example of not being very careful is slamming the doors on your truck on the way to your hunting spot. Coyotes have good hearing and those sudden out-of-place noises can indicate trouble and scare them away from you.

The same thing goes for when you are at your spot. Don’t talk or laugh loudly, no matter the occasion. That will only give out your position and at that point, you might even call it a day as no coyote will be silly enough to walk right into you.

During the night you will have to be even more careful as the predator’s senses will be tightened a notch. Head over to my full article on the topic if you want to learn more about coyote night hunting.

You Aren’t Seeing The Coyote(s)

Being able to spot the coyote is one of your main goals and is the thing that will decide whether your hunt will be successful or not. Sometimes, you do everything just right and you manage to catch the attention of a curious young specimen. It gets close to you but you don’t see it, as you are not looking at the right place.

Most coyotes will come downwind, although this rule has had a few exceptions. The best way to prepare for everything is to bring a spotter with you. Two pair of eyes is always better than one as long as you two can stay silent. Let him watch your back and alert you when a coyote is nearby.

Wearing Your Spot Out

Hunting too often on the same spot will either make the coyotes aware of you and the danger your specific spot poses to them or you will simply shoot down all of the young ones at a certain point.

Many landowners will greet you with open hands once you mention the words “kill” and “coyote” in the same sentence. You should definitely take advantage of that. Change your predator hunting area every now and then. What I’ve seen is hunters thinking their 50-acre area is enough to keep them busy all season. That is a big mistake you shouldn’t make.

Not Having The Proper Gear

Having good gear is more vital during the night than during the day but a few extra toys to play around with won’t hurt you. A good predator call, silent rifle, and a good rifle scope are the things that will boost your statistics greatly.

Ghillie suits, gloves, tripods for your rifle, or other things to make your day easier are welcomed as well. I’d personally emphasize on a good scope, then I would make sure that my camouflage is good enough.

One thing that I absolutely love for my coyote shooting setup is the shooting sticks. Those are basically bipods or tripods which help you shoot while standing up. Not every hunter approves the shooting sticks as they can sometimes make you far too visible from distance rendering your disguise useless. At the same time, a good shooting stick will give you enough elevation to have a good view of the area you are scouting or hunting at. Pair that with the best ghillie suit and you will be indistinguishable.

I’ve covered some of the best ghillie suits extensively in my special guide on the topic, make sure you check it out!

Night hunting requires a few extra things such as:

If you want to check out one scope model which is perfect for nighttime hunting and is a good budget option, check out the Sightmark Photon RT night vision scope.

Giving Up Too Soon

Something you should never do is give up. This doesn’t only apply to hunting coyotes. It applies to hunting any other animal type, as patience is your best and strongest weapon. When out coyote hunting a regular site is to see a rookie leave his spot after just 15-30 minutes without any sightings. This is why most rookies prefer deer hunting, as that is more dynamic and doesn’t involve stalking your prey for hours at a time (unless you are hunting from a tree stand or a ground blind).

Sure, this is demoralizing but more often than not it takes around 1-2 hours for your whole coyote calling and baiting strategy to bare fruits. My suggestion is to wait 2 hours. After that (assuming you’ve tried everything) it is a good idea to scout another area and change your position.

Forgetting What You Are Up Against

Never forget that the not-so-smart coyotes are already dead. All you are left up against are the ones who have experience with being hunted. If you play them the same song and dance they’ve heard and seen for years, you won’t gain their attention at all.

Try being creative, try different coyote calling sounds, scout your area well and always make sure that you have a terrain advantage. Speaking of that…

Having The Wrong Spot

An example of a wrong spot is having a low point surrounded by hills. This greatly limits the area you can scout with your binoculars or scope. Try choosing a hill spot that oversees the area around you as much as possible. This way, you get a far greater viewing range and can spot a coyote from far away. All that is left for you to do after you spot it is use calls and baits to attract its attention. Once it is in range it is go-time.

The last part of the coyote hunt is pulling the trigger. Try not to overexcite yourself too much after you spot your first one. There will be many after it and people often miss their shots after waiting for 1-2 hours and then suddenly spotting something. Stay calm, breathe, and even take a moment to relax if you want to. Once the coyote is up to something it won’t drastically change course and run away unless you scare it. Follow it with your scope and take the shot when you feel confident enough.

Pro Tip: If there is more than one coyote, say two, kill the first one as fast as possible and use your coyote calling to lure back the second one. Use distress coyote sounds as the second one will feel the urge to go back and help his buddy out.

Scouting is the most important part of hunting. Knowing the woods and fields around you is paramount to your success as a hunter. Once you get to know the terrain you will feel more comfortable and will have an edge over the game you are after.

On top of all that, when knowing well the area you will be able to easily determine a sweet spot from which everything around you can be overseen. Then, all there is left for you to do is bring a spotting buddy and the rest is easy.

How long should you call for coyotes?

When I am out on a coyote hunt I try to get a view of around a mile away. If at the 20-30th minute they haven’t even shown on my radar, then they aren’t coming at all, so I change spots. Typically, I use cottontail distress calls for 3-4 minutes followed by 1 minute of silence. Then, if nothing appears, I go for a 4-5 minute baby jack distress calls.

How far can a coyote hear?

Judging by my experience, coyotes can answer calls as far as 5 miles away from you. That depends heavily on the wind, of course. In general, if you think you’ve heard a coyote a mile away, it is as a rule of thumb to double that distance.

Do Coyotes hunt in packs?

Coyotes live in packs and form families but they often scout and hunt alone or in loose pairs on rare occasions. That is why people often think that they also live alone, as most coyote sightings are of a lone specimen.

Knowing how to avoid the typical coyote hunting mistakes is paramount to any beginner hunter out there. Of course, one of the best ways to learn is through bad experiences and mistakes but I’d rather have you go out with a little bit of knowledge on the matter than go against a smart predator completely unprepared.

This website uses cookies to improve your experience while you navigate through the website. Out of these cookies, the cookies that are categorized as necessary are stored on your browser as they are essential for the working of basic functionalities of the website. We also use third-party cookies that help us analyze and understand how you use this website. These cookies will be stored in your browser only with your consent. You also have the option to opt-out of these cookies. But opting out of some of these cookies may have an effect on your browsing experience.
Necessary Always Enabled
Necessary cookies are absolutely essential for the website to function properly. This category only includes cookies that ensures basic functionalities and security features of the website. These cookies do not store any personal information.
Non-necessary
Any cookies that may not be particularly necessary for the website to function and is used specifically to collect user personal data via analytics, ads, other embedded contents are termed as non-necessary cookies. It is mandatory to procure user consent prior to running these cookies on your website.
SAVE & ACCEPT